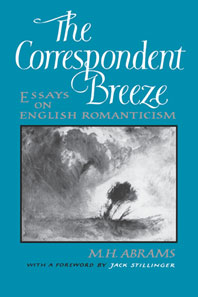 “[Abrams] can sum up whole epochs and genres with a telling phrase. . . .Admirably cogent and erudite throughout.” —Kirkus Reviews

One of the deans of literary criticism in America, M. H. Abrams is Class of 1916 Professor of English at Cornell University. He is the author of two landmark books, The Mirror and the Lamp and Natural Supernaturalism, and general editor of the Norton Anthology of English Literature. This volume collects the essays, written over three decades, which—together with his books—testify to his preeminence. The essays examine Wordsworth’s and Coleridge’s innovations in their theories about the language of poetry; the prevalence, sources, and significance of a key Romantic image, the “correspondent breeze”; the pervasive revolutionary spirit of Romanticism; the defining characteristics and chief exemplars of the most distinctive poetic genre of the age, the “greater Romantic lyric”; the relation of Coleridge and Wordsworth to modernist poetics and literature; the philosophic and scientific backgrounds of Coleridge’s thinking; and the numerous manifestations of apocalypticism in the Romantic period.