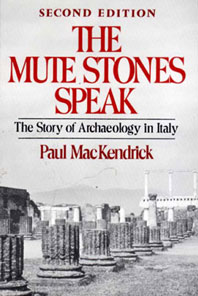 "MacKendrick writes so enthusiastically that all laymen who have a serious interest in scholarship and antiquity will delight in following his story." --New York Times Book Review

“An intelligible, well-told tale that recounts . . . what excavators and scholars using the full repertory of modern skills and techniques have in recent years discovered about the remains of an ancient civilization in Italy and what the discoveries mean.” — C. H. Kraeling