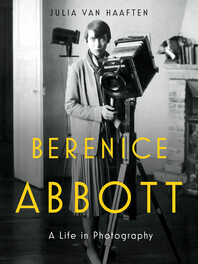 A teenage rebel from Ohio, Abbott escaped to Paris—photographing, in Sylvia Beach’s words, “everyone who was anyone”—before returning to New York as the Roaring Twenties ended. Abbott’s best known work, “Changing New York”, documented the city’s 1930s metamorphosis. She then turned to science as a subject, culminating in work important to the 1950s “space race”. This biography secures Abbott’s place in the histories of photography and modern art while framing her accomplishments as a female artist and entrepreneur.

“Absorbing... Abbott's integrity and sense of honor, her restless and fearless nature, and her absolute devotion to telling the truth of her experience, come through loud and clear.” — The Washington Post

“This finely observed and assiduously researched book manages to pin down an artist who was, in her own words, “a little rebel from beginning to end”.” — The Art Newspaper