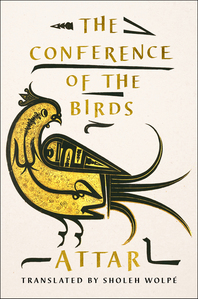 Award-winning translator Sholeh Wolpé recaptures the beauty of one of Persian literature’s most celebrated masterpieces.

Considered by Rumi to be “the master” of Sufi mystic poetry, Attar is best known for his epic poem The Conference of the Birds, a magnificent allegorical tale about the soul’s search for meaning. The poem recounts the perilous journey of the world’s birds to the faraway peaks of Mount Qaf, in search of the mysterious Simurgh, their king. Attar’s beguiling anecdotes and humour intermingle the sublime with the mundane, the spiritual with the worldly, and the religious with the metaphysical. Reflecting the entire evolution of Sufi mystic tradition, Attar’s poem models the soul’s escape from the mind’s rational embrace.

Sholeh Wolpé re-creates the beauty of the original Persian in contemporary English verse and poetic prose, capturing for the first time the beauty and timeless wisdom of Attar’s masterpiece for modern readers.

“Attar’s grand allegory for the journey of the soul as it seeks union with the divine has influenced countless artists, poets, mystics, and believers around the world. But never before has it been rendered in English with such beauty, elegance, and precision. Wolpé’s translation of this epic is sure to be as timeless as the masterpiece itself.” — Reza Aslan, author of Zealot

“I was struck by this accomplished translation, which moves the reader along from one stanza to the next in strong, compelling rhythms. I think what Sholeh Wolpé has done exceedingly well is to bring this medieval poem over into lively, contemporary English that feels absolutely right and not at all forced.” — Edith Grossman, author of Why Translation Matters

“In Sholeh Wolpé’s version, this sly, knowing Sufi classic will surprise and delight a new generation of readers.” — Jack Miles, general editor of The Norton Anthology of World Religions

“As close to the original a reader can come in translation, and imbued with the same kind of revelation, it makes clear why Attar remained such a strong influence on Rumi. The reader travels, along with the poet’s birds, to greater spiritual insight through transcendent verse.” — Roger Sedarat, Queens College