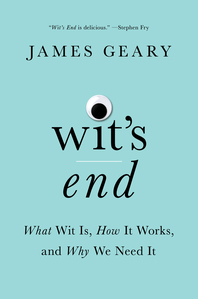 “A witty book about wit that steers an elegant path between waggishness and wisdom.” — Stephen Fry

James Geary explores every facet of wittiness, from its role in innovation to why puns demonstrate the essence of creativity. Geary reasons that wit is both visual and verbal, physical and intellectual: there’s the serendipitous wit of scientists, the crafty wit of inventors, the optical wit of artists and the metaphysical wit of philosophers.

In Wit’s End, Geary embraces wit in every form by adopting a different style for each chapter; he writes the section on verbal repartee as a dramatic dialogue, the neuroscience of wit as a scientific paper, the spirituality of wit as a sermon, and other chapters in jive, rap and the heroic couplets of Alexander Pope. Demonstrating that brevity really is the soul of wit, Geary crafts each chapter from concise sections of 200, 400 or 800 words. Entertaining and illuminating Wit’s End shows how wit is much more than a sense of humour.

“Playful, fiercely intelligent, silly, funny and immensely informative - [Wit's End] makes for a breathless read that leaves you feeling enormously enriched. The reinvention from chapter to chapter is a masterstroke and keeps the subject matter joyously buoyant.” — Reece Shearsmith, Actor and Writer

“James Geary has produced a rich cornucopia of wit and its origins in the wittiest literary way possible. A delight.” — Julia Hobsbawm

“Geary presents a history of wit with all the intellectual force and facility that the more learned reader might expect...” — Times Literary Supplement

“... there’s a fascinating exploration of visual wit in the form of an art-history lecture. With humour and verve and by the variety of his style, Geary shows wit to be multifaceted, subtle, ambiguous and akin to wisdom.” — The Irish Times

“Wit’s End juggles scholarship, humorous anecdote and critical insight with a diabolical, almost sinister dexterity. No shrinking violet, Geary fully intends to strut his stuff, to glitter and beguile, and he does so with remarkable ingenuity and chutzpah.” — The Washington Post

“Geary is a keen storyteller, promiscuous with quotes and figures. One could do worse at a cocktail party than simply opening his book at random and reading aloud.” — The New Yorker