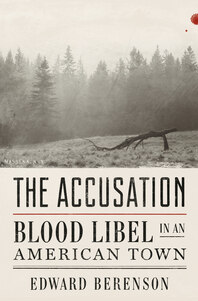 A fascinating investigation of America’s only alleged case of blood libel and what it reveals about anti-Semitism in the United States and Europe.

On 22 September 1928, four-year-old Barbara Griffith strayed into the woods surrounding Massena in New York. Hundreds of people looked for the child but could not find her; then someone suggested that Barbara had been kidnapped and killed by Jews. The mayor and local police believed the rumour and the allegation of ritual murder, known to Jews as “blood libel”, took hold. Rational people in government and Jewish leaders had to intervene to restore calm once Barbara was safely found.

At first glance it seems bizarre that so many embraced the accusation but many of Massena’s inhabitants had emigrated recently from Central and Eastern Europe where "blood libel" was common. The Accusation is a shocking and perceptive cross-cultural exploration of American and European responses to anti-Semitism.

“Two powerful new books show that anti-Semitism acknowledges no time limits and recognises no borders. Edward Berenson’s The Accusation: Blood Libel in an American Town is a warning against complacency.” — Jim Crace, Books of the Year 2019, New Statesman

“Berenson’s skill in this eye-opening and timely book includes weaving into this local story the larger history of the European blood libel, and how it migrated into the New World — in the 1920s it was rife in Montreal.” — Howard Cooper, Year in Review: Books in 2019, The Jewish Chronicle

“He [Berenson] offers a vivid picture of early twentieth-century America, a time of lynch mobs, urban riots and intolerance towards Jews, Catholics, African Americans and immigrants...The Accusation is part of a fascinating new wave of the social history of modern antisemitism.” — Times Literary Supplement