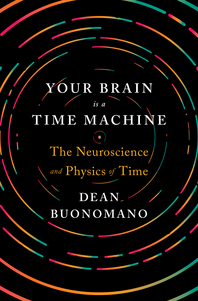 A neuroscientist investigates how the architecture of the human brain shapes our understanding of the nature of time.

"Time" is the most common noun in the English language yet philosophers and scientists don’t agree about what time actually is or how to define it. Perhaps this is because the brain tells, represents and perceives time in multiple ways.

Dean Buonomano investigates the relationship between the brain and time, looking at what time is, why it seems to speed up or slow down and whether our sense that time flows is an illusion. Buonomano presents his theory of how the brain tells time, and illuminates such concepts as free will, consciousness, space-time and relativity from the perspective of a neuroscientist. Drawing on physics, evolutionary biology and philosophy, he reveals that the brain’s ultimate purpose may be to predict the future–and thus that your brain is a time machine.

"Our experience of time is not the same as time itself; the former is largely our creation. French philosopher Henri Bergson once publicly debated this point with Einstein – and lost. If only he’d had recourse to this book, written by one of the first neuroscientists to ask how the human brain encodes time. Take that, Albert!" — Science books we’re keen to read in 2017, New Scientist

"... a readable exploration of how the architecture of the human brain shapes our understanding of the nature of time." — The Bookseller

"Apparently elastic and possibly illusory, time is a puzzle to physicists and neuroscientists alike. Dean Buonomano straddles the divide, invoking cutting-edge theory and research as he wrestles with the often glaring mismatch between physical and 'felt' time. The result is immensely engaging..." — Nature

"Buonomano’s ambition is inspiring and his writing is rich, combining a readable style with illustrative examples... it [Your Brain is a Time Machine] hits the ambitious target of being both thorough and accessible." — Chemistry World

"... nothing if not an entertaining read." — Nature Physics