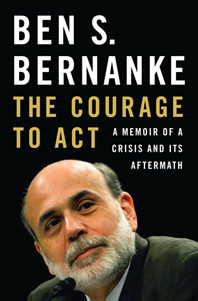 Ben S. Bernanke’s rise to chair of the Federal Reserve, the massive financial crisis, and the Fed’s bold and effective response.

In 2006, Ben S. Bernanke was appointed chairman of the Federal Reserve, capping a meteoric trajectory from a rural South Carolina childhood to professorships at Stanford and Princeton, to public service in Washington’s halls of power. There would be no time to celebrate, however—the burst of the housing bubble in 2007 set off a domino effect that would bring the global financial system to the brink of meltdown.

In The Courage to Act, Ben Bernanke pulls back the curtain on the tireless and ultimately successful efforts to prevent a mass economic failure. Working with two US presidents and two Treasury secretaries, Bernanke and his colleagues used every Fed capability, no matter how arcane, to keep the US economy afloat. From his arrival in Washington in 2002 and his experiences before the crisis, to the intense days and weeks of the crisis itself, and through the Great Recession that followed, Bernanke gives readers an unequalled perspective on the American economy.

This narrative will reveal for the first time how the creativity and decisiveness of a few key leaders prevented an economic collapse of unimaginable scale. Bernanke explains the inspiration behind the book’s title, saying, “When the economic well-being of their nation demanded a strong and creative response, my colleagues at the Federal Reserve, policymakers and staff alike, mustered the moral courage to do what was necessary, often in the face of bitter criticism and condemnation. I am grateful to all of them and proud to have been part of the global effort to contain the most dangerous economic crisis of our time.”

“Bernanke details the hurdles he faced, from cynically obstructive congressmen to obstreperous regulators and quarrelsome interest rate hawks, as well as hapless policymaking in Europe. During much of the panic, he writes: “The Fed alone, with its chewing gum and baling wire, bore the burden of battling the crisis.” The guts of his story are familiar. It is well narrated with regular flashes of colour…” — Financial Times

“The former chair has penned a lucid account of the crisis and its aftermath... Mr Bernanke’s narrative of his time in office is a lucid, analytical affair… the book provides a robust defence of the Fed’s response to the crisis. Mr Bernanke clearly sees himself as someone who did what was necessary to save the economy from disaster, in the face of a barrage of unwarranted criticism. The result is a book which compels...” — The Economist

“It was Ben Bernanke, not Gordon Brown, who steered us through the 2008 financial meltdown...the book's most interesting chapters are those that deal with the crisis...Above all, [Bernanke] exuded calm, even when there was plenty of inner turmoil. The calmness comes over in this book, and so does plenty of the turmoil.” — The Sunday Times

“It was a happy chance that this scholar, known for his work on the Great Depression, was chairman of the central banking system of the US during the biggest financial crisis since the early 1930s. His [Bernanke's] new book, The Courage to Act, provides a fascinating account of the effort to save the world from another such catastrophe.” — Martin Wolf, Lunch with the FT, Financial Times

“'Why', asked the Queen during her visit to the London School of Economics in November 2008, 'did no one see it coming?' The most thorough and persuasive explanation yet comes in a book by one of the key people, arguably the key person, involved, Ben Bernanke, chair of the US Federal Reserve Board.” — The Independent

“Bernanke's memoir is a crucial document of record that will be invaluable to future historians. As far as any memoir can be, it is an honest and accurate account. There is no hubris or exaggeration: simply a telling of the tale of the most dramatic period in office of any Fed Chairman to date.” — Mervyn King, Prospect

“Bernanke was at the helm of the world's most important central bank during the financial crisis of 2007-08... Here he gives a compelling account of what he and the Federal Reserve did and why they did it... the defence of the Fed against its critics is compelling. ” — Best Books of 2015, Financial Times

“This memoir is a much better read than that of his predecessor, Alan Greenspan: the writing flows easily and the book is much better structured.” — The Irish Times