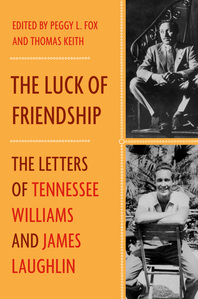 A friendship struck in 1942 would last for forty-one years through critical acclaim and rejection, commercial success and failure, manic highs, bouts of depression, and serious and not-so-serious liaisons. Tennessee Williams’s and James Laughlin’s letters provide a window into the literary history of the mid-twentieth century.

“Ultimately these letters show us that while Tennessee Williams’s own tragic ending left theatre the poorer for it, their unique insight in to one of the greatest dramatists of the 20th century leaves us all the richer.” — The Irish Times