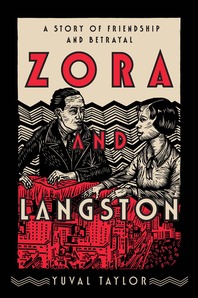 Hurston and Hughes, two giants of the Harlem Renaissance and American literature, were best friends—until they weren’t.

Zora Neale Hurston (Their Eyes Were Watching God) and Langston Hughes (“The Negro Speaks of Rivers”, “Let America Be America Again”) were collaborators, literary gadflies and close companions. They travelled together in Hurston’s dilapidated car through the rural southern US collecting folklore, worked on the play Mule Bone and wrote scores of loving letters to each other. They even had the same patron: Charlotte Osgood Mason, a wealthy white woman who insisted on being called “Godmother”.

Paying them lavishly while trying to control their work, Mason may have been the spark for their bitter falling-out. Yuval Taylor answers questions about their split while illuminating Hurston’s and Hughes’s lives, work, competitiveness and ambition.