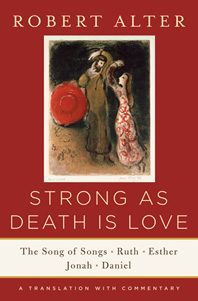 An award-winning translation brings new immediacy to these beloved books of the Bible. Read them for the first time, again.

These five late biblical books offer readers a range of pleasures not usually associated with the Bible. They are artful, entertaining literary works—innovative, even startling. Women often stand centre stage. The Song of Songs, a celebration of young love, frankly sensuous, with no reference to God, offers some of the most beautiful love poems of the ancient world. The story of Esther’s shrewd triumph is a secular entertainment that mixes farce with sly sexual comedy. The character of Ruth embodies the virtues of loyalty, love and charity in a harmonious world. Enigma replaces harmony in Daniel, whose feverish dreams envision the end of time. And the traditions of prophecy are recast in the tale of a fish that swallows Jonah. Alter’s translation restores the original power of these popular books.

“Encountering these books in this form—as ancient literature, laid out as poetry, with copious footnotes—allows you to be dazzled by their range, from the frank eroticism of the Song of Songs to the bucolic idyll of Esther and the downright weirdness of Daniel.” — New Statesman

“Robert Alter's continuing project of translating the Old Testament is perhaps one of the most important literary/religious endeavours of recent times...Alter adds new levels of richness and poetry to the text, while adding an illuminating commentary to untangle the snuggles of time.” — Catholic Herald

“In each of the Biblical books in this volume a balance of explanation, translation and commentary is offered. In each of them the reader is made a partner in an adventure of scholarship and clarification which is both rare and exemplary. ” — Eavan Boland, The Irish Times