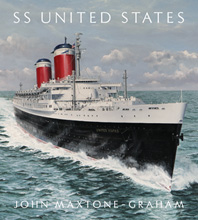 John Maxtone-Graham has again produced a profusely illustrated tribute, this one to America's most famous and historic liner.

Arguably the world’s most articulate and authoritative maritime historian, John Maxtone-Graham documents SS United States, her design, construction and seventeen years of impeccable service. He introduces us to dozens of passengers, famous and infamous, as well as captains and crew.

The last great American ocean liner, SS United States could be converted to a 14,000-man troop carrier and was capable of attaining a speed of over 40 knots (although in her luxury Atlantic crossings the ship was much slower). Sadly, jet travel put an end to ocean crossings and the all-aluminium ship rests in Philadelphia while groups of fans continue to try to repurpose it.