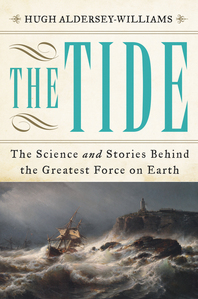 A rich and sweeping exploration into the science and history behind the most mysterious, primal, and powerful force on earth: the tide.

Half of the world’s population today lives in coastal regions lapped by tidal waters. But the tide rises and falls according to rules that are a mystery to almost all of us. In The Tide, celebrated science writer Hugh Aldersey-Williams weaves together centuries of scientific thinking with the literature and folklore the tide has inspired to explain the power and workings of this most remarkable force.

Here is the epic story of the long search to understand the tide: from Aristotle, who is said to have drowned himself in his efforts to figure out the Greek tides, to the pioneering investigations into the role of the moon by Galileo and Newton, to the quest to understand and even control the tide in our own time. Throughout, Aldersey-Williams whisks the reader along on his travels in search of the most remarkable tidal phenomena. He visits the Bay of Fundy in Nova Scotia, where the tides are the strongest in the world; arctic Norway, home of the raging tidal whirlpool known as the maelstrom; and Venice, to investigate efforts to defend the city against flooding caused by the famed acqua alta.

Along the way, Aldersey-Williams delves into classic literary portrayals of the tide from Shakespeare to Dickens, Melville to Jules Verne. And he reveals the tidal truths behind the Homeric tale of Scylla and Charybdis, the biblical story of Moses parting the Red Sea, the conquests of Julius Caesar, the Boston Tea Party, and the D-Day landings in Normandy.

“This fascinating book deftly explores the dramatic history, critical importance, and scientific wonder of the tides. Hugh Aldersey-Williams is a marvelous guide who takes the reader on a sweeping and thought-provoking adventure into the heart of one of the most captivating, mysterious, and elemental forces of nature.” — Eric Jay Dolin, author of Brilliant Beacons

“Prepare for a voyage with the best of companions—Hugh Aldersey-Williams is a storyteller supreme, and he’s found a subject worthy of his talents.” — Edward Dolnick, author of The Clockwork Universe

“A wonderfully enjoyable exploration of the mysterious rhythms of the sea. I loved the combination of literary, historical, scientific, and experiential accounts of the tides, each ebbing and then flowing to allow the others to wash up on the pages of this remarkable book.” — Mark Miodownik, author of Stuff Matters

“A superb book [and] a delight to read. . . . Imagine, if possible, a gently studious Bill Bryson crossed with an upbeat and relaxed WG Sebald.” — James McConnachie, Sunday Times