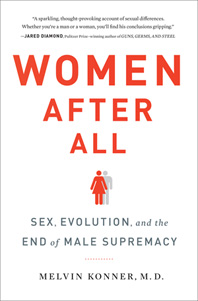 A short, lively argument for the natural superiority of women.

In Women After All, anthropologist Melvin Konner traces the arc of evolution to explain the relationships between women and men. Drawing on colourful examples from the natural world—the octopus, the black widow spider and coral reef fish, which can switch from male to female in a single reproductive career—he sheds light on our biologically different human identities and the poignant exceptions that challenge the male/female divide.

We meet hunter-gatherers in Botswana whose culture gave women a prominent place, inventing the working mother and respecting women’s voices around the fire. History upset this balance as a dense world of war fostered extreme male dominance. But our species has been recovering over the past two centuries and an unstoppable move towards equality is afoot. It will not be the end of men but it will be the end of male supremacy and a better, wiser world for women and men alike.

“Konner mines evolution and anthropology to probe gender identities in the light of biology, sexual conflict across species and more. The provocative scenarios he lays out include a man-free world where women reproduce using DNA from other women's eggs.” — Nature

“This is strong stuff...Konner really does know his evolutionary onions...” — The Mail on Sunday

“...it [Women After All] is witty, well paced, packed with useful information and suggests an intriguing new perspective on an old phenomenon...” — Times Literary Supplement

“...he [Konner] does support his arguments with a whole kaleidoscope of fascinating research and information.” — Human Givens