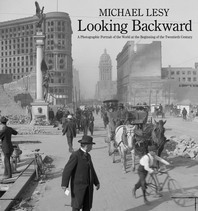 Haunting views of the early twentieth century’s most significant events flank pictures of the last remnants of the premodern world.

At the turn of the twentieth century, the stereograph was king. Its binocular images revealed the world in vivid, three-dimensional detail. Drawing on an enormous, rarely seen collection of stereographic views, Michael Lesy presents images displaying a riot of peoples and cultures, stark class divisions and unsettling glimpses of daily life a century ago.

Lesy’s evocative essays reassert the primacy of the stereograph in American visual history. In underscoring the unnerving parallels between that period and our own, Looking Backward reveals a history that shadows us today.

“The author is one of America's leading photographic historians and so a collection of images selected by him is going to appeal to the professional eye as well as the more casual enquiring reader... A fascinating collection, annotated in great detail, and certainly food for thought and meditation.” — State Media