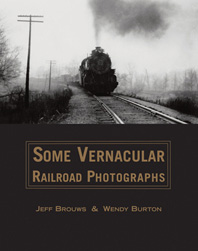 A remarkable collection of images taken by passionate amateurs that have both a historical value and an innocent charm.

Jeff Brouws and Wendy Burton have been collecting vernacular railroad photographs for many years, poring through disorganized boxes of snapshots at train shows and swap meets. With a keen editorial eye they have sought out the unusual, the lyrical, the pastoral, and the urban, ultimately assembling a collection that includes railroad landscapes, locomotives, bridges, and people primarily during the age of steam. This fascinating assemblage will appeal to fans of vernacular photography and rail fans alike. It is accompanied by an essay that includes a brief discussion of the aesthetic evolution of railroad photography in the early to mid-twentieth century and the phenomenon of the International Engine Picture Club, which acted as a clearing house and swapping mechanism for rail fans.