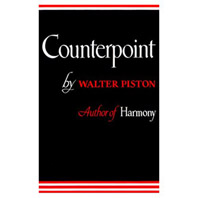 The art of counterpoint is the art of combining melodic lines. The essence of counterpoint, however, is something deeper than a process of manipulation. It is an ingredient of the inner vitality of music and is found in nearly all music. It is to an understanding of counterpoint as such that this book is directed.

In Counterpoint—for many years one of the most highly regarded texts in the field—the principles by which the contrapuntal element has operated in the works of composers of the eighteenth and nineteenth centures are presented. The counterpoint studied is the harmonic, rhythmic, instrumental style so well represented by the music of Bach. For it is this style that most of the composers who came after Bach, including those of our own time, have regarded as the ideal of contrapuntal technique. Piston's method in Counterpoint is to discover how music has been written rather than how it should be written. This book, in contrast to most traditional studies, states principles and gives rules that are based on actual observations of the practice of composers rather than those invented by the theorist. It offers examples drawn from the works of standard composers rather than those constructed by the author. The literature of the last three hundred years is examined to form the logical basis for this study. Throughout the book, exercises are provided that call for the writing of music and that are intended to clarify the principles under discussion.

Walter Piston, one of America's outstanding composers, created for this book an approach to the study of counterpoint that is stimulating and helpful to an understanding of the music of all times.