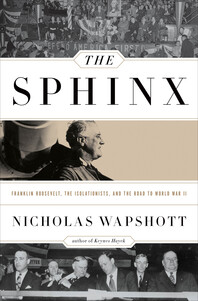 Why it took the United States so long to enter the Second World War.

In The Sphinx Nicholas Wapshott explains the profound and protracted difficulties Franklin Roosevelt had to overcome before he could commit American forces to the Second World War. FDR was obliged to turn around the reluctant American public, had to deal with isolationists in Congress and subdue leaders of opinion, including William Randolph Hearst, Joseph Kennedy, Charles Lindbergh, Henry Ford and Walt Disney.

Wapshott explains in detail for the first time the punitive terms demanded by Congress that insisted that Britain must prove its bankruptcy before American military aid was provided. His account reveals the hardnosed bargaining between FDR and Winston Churchill that ultimately ensured the dissolution of the British Empire and the replacment of the Pax Britannica with the Pax Americana.