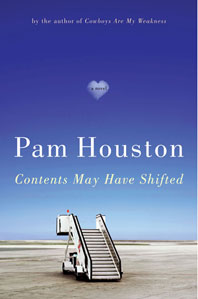 Heart-stopping prose and crackling observations on a spiritual journey toward a life rich in love and freedom.

Stuck in a dead-end relationship, this fearless narrator leaves her metaphorical baggage behind and finds a comfort zone in the air, “feeling safest with one plane ticket in her hand and another in her underwear drawer.” She flies around the world, finding reasons to love life in dozens of far-flung places from Alaska to Bhutan. Along the way she weathers unplanned losses of altitude, air pressure, and landing gear. With the help of a squad of loyal, funny, wise friends and massage therapists, she learns to sort truth from self-deception, self-involvement from self-possession.

At last, having found a new partner “who loves Don DeLillo and the NHL” and a daughter “who needs you to teach her to dive and to laugh at herself”—not to mention two dogs and two horses—“staying home becomes more of an option. Maybe.”

“Starred review. Unapologetic and empowering, Houston’s book hammers home the idea that if you don’t have problems, you probably aren’t living. Or, to use her metaphor, we all have baggage, so we might as well get used to traveling with it.” — Katharine Fronk, Booklist

“...[Houston] has...concocted a tale so vivid, intricate, and intimate that it puts high-def TV to shame...” — Natasha Clark, Elle Magazine