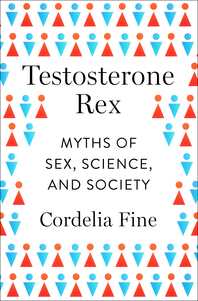 Many people believe that, at its core, biological sex is a fundamental, diverging force in human development. According to this overly familiar story, differences between the sexes are shaped by past evolutionary pressures—women are more cautious and parenting-focused, while men seek status to attract more mates. In each succeeding generation, sex hormones and male and female brains are thought to continue to reinforce these unbreachable distinctions, making for entrenched inequalities in modern society.

In Testosterone Rex, psychologist Cordelia Fine wittily explains why past and present sex roles are only serving suggestions for the future, revealing a much more dynamic situation through an entertaining and well-documented exploration of the latest research that draws on evolutionary science, psychology, neuroscience, endocrinology, and philosophy. She uses stories from daily life, scientific research, and common sense to break through the din of cultural assumptions. Testosterone, for instance, is not the potent hormonal essence of masculinity; the presumed, built-in preferences of each sex, from toys to financial risk taking, are turned on their heads.

Moving beyond the old “nature versus nurture” debates, Testosterone Rex disproves ingrained myths and calls for a more equal society based on both sexes’ full, human potential.

“Fascinating [and] bold. . . . Fine has written a book that’s not only well-researched and convincing but also . . . delightfully humorous.” — Barbara J. King, NPR

“The expression ‘essential reading for everyone’ is usually untrue as well as a cliché, but if there were a book deserving of that description this might just be it.” — Antonia Macaro, Financial Times

“In addition to being hopeful, Fine is also angry. We should all be angry. Testosterone Rex is a debunking rumble that ought to inspire a roar.” — The Guardian

“[Fine] convincingly and entertainingly demonstrates that, despite stereotypes, such characteristics as risk-taking, competitiveness and nurturing are not “essential” to one sex over the other and cannot be blamed for the lack of equality between males and females in contemporary society.” — Clara Moskowitz, Scientific American

“Cordelia Fine’s Testosterone Rex: Myths of Sex, Science, and Society does the public service of deconstructing the biological and societal tenets on which the continued inequality of the sexes is largely founded. . . . Using humor and her uniquely accessible academic writing style, . . . [Fine disrupts] what we think we know about gender difference.” — Katie Klabusich, Rewire

“A provocative and often fascinating book.” — The Economist