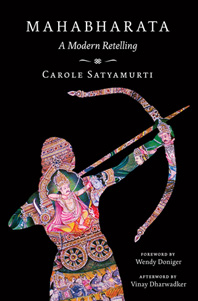 The Mahabharata, originally composed some two thousand years ago is an epic masterpiece, "a hundred times more interesting" than the Iliad and the Odyssey (Wendy Doniger), it is a timeless work that evokes a world of myth, passion and warfare while exploring eternal questions of duty, love and spiritual freedom. A seminal Hindu text, it is one of the most important and influential works in the history of world civilisation.

This new English retelling, innovatively composed in blank verse, covers all the books of the Mahabharata. It masterfully captures the beauty, excitement and profundity of the original Sanskrit poem as well as its magnificent architecture and extraordinary scope.

“Carole Satyamurti’s Mahabharata, crucially not a translation, uses previous English versions as a springboard for her blank-verse "modern retelling". Her aim has been to produce a readable and gripping narrative, focusing on the story, for the reader who may have little or no previous knowledge of the epic, and in this she has been resoundingly successful.” — New Statesman

“A bold new English translation captures the excitement and scope of the original Sanskrit epic poem.” — The Tablet