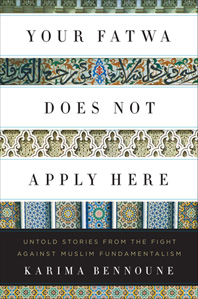 In Lahore, Pakistan, Faizan Peerzada resisted being relegated to a “dark corner” by staging a performing arts festival despite bomb attacks. In Senegal, wheelchair-bound Aissatou Cissé produced a comic book to illustrate the injustices faced by disabled women and girls. In Algeria, publisher Omar Belhouchet and his journalists struggled to put out their paper, El Watan (The Nation), the same night that a 1996 jihadist bombing devastated their offices and killed eighteen of their colleagues. In Afghanistan, Young Women for Change took to the streets of Kabul to denounce sexual harassment, undeterred by threats. In Minneapolis, Minnesota, Abdirizak Bihi organized a Ramadan basketball tournament among Somali refugees to counter the influence of Al Shabaab. From Karachi to Tunis, Kabul to Tehran, across the Middle East, North Africa, South Asia, and beyond, these trailblazers often risked death to combat the rising tide of fundamentalism within their own countries.

But this global community of writers, artists, doctors, musicians, museum curators, lawyers, activists, and educators of Muslim heritage remains largely invisible, lost amid the heated coverage of Islamist terror attacks on one side and abuses perpetrated against suspected terrorists on the other.

A veteran of twenty years of human rights research and activism, Karima Bennoune draws on extensive fieldwork and interviews to illuminate the inspiring stories of those who represent one of the best hopes for ending fundamentalist oppression worldwide.

“A powerful and captivating tribute to those brave women and men who have stood up to fundamentalist violence in their own countries from Afghanistan to Mali, this book will hopefully inspire a new and improved international human rights response.” — Mary Robinson, former president of Ireland, former United Nations High Commissioner for Human Rights

“This work redefines courage in a humbling dimension. Bennoune’s meticulous testament serves as a warning to the complacent and rebukes ‘politically correct’ posturing that makes excuses for the inexcusable and canvasses tolerance for the intolerable.” — Wole Soyinka, winner of the 1986 Nobel Prize for Literature

“Courageous and passionate, illuminating the confiscated lives of secularists, religious minorities, and Muslims alike. Yet what is striking is not their victimhood but their resilience and resistance—that is where hope lies.” — Azar Nafisi, author of Reading Lolita in Tehran

“For too long, these types of voices, those Muslims who stand for individual freedom, debate, creativity, and compassion, have been ignored. But if we are ever to defeat the extremists, the counter narratives they provide to the distorted version of Islam need to be heard loud and clear.” — Ali Soufan, author of The Black Banners

“Bennoune, and those she profiles, bravely meets the tide of extremism with a sense of shared community and nonviolent purpose.” — Kirkus Reviews

“Starred review. Her interviews sear with passion as her subjects deconstruct false views of Islam and inaccurate readings of the Qur’an. Again and again, Bennoune shines a spotlight on those who battle with intelligence and creativity against guns and bloodlust. She has created a significant and compelling record of modern life in which she spares no one, from the right wing to the left.” — Booklist

“A fascinating and often heartbreaking read… Bennoune’s writing is crisp and conversational, and she possesses a deft sense of how to clearly deconstruct the most ingrained American arguments about violence in the name of Islam.” — Lorraine Ali, Los Angeles Times

“A compelling, meticulously researched account of the legions of Muslims whose struggles against fundamentalist violence are almost never reported in our media…. Required reading.” — Rachel Newcomb, Washington Post