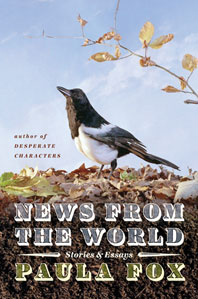 A collection that traces the celebrated career of a grande dame of contemporary literature.

This complete gathering of Paula Fox's short works spans forty-five illustrious years of her career, from 1965 to 2010. There are perfectly turned stories (two of which—"Grace" and "The Broad Estates of Death"—won the O. Henry Prize) in which characters unexpectedly find themselves at a crossroads and struggle to connect with others. There is memoir—a genre where Fox's honesty, grace, and perception set her apart—in which Fox revisits childhood ideas about art and reality, life in New York in the 1960s, and her relationship with her husband's family. And there are essays—pointed, funny, relentlessly persuasive pieces on such topics as censorship and the corruption of language. Enlivened by Fox's signature wit and electrified by her unsparing insights into human nature, News from the World is essential for Fox's loyal readers and perfect to introduce those who are meeting her for the first time.

“Paula Fox is one of our greatest writers. Her prose is a model of ruthless, gorgeous efficiency and her mind is so unnervingly alert to the messy contradictions that come with being human. These essays and stories will delight and inspire anyone who cares about literature, storytelling, and truth itself.” — Tom Bissell, author of Extra Lives

“Paula Fox's essays and short stories all display a spare, marvelous luminosity. The author's irreducible voice—it was the same with Virginia Woolf—can always be heard, whatever the genre.” — Thomas Mallon, author of Fellow Travelers