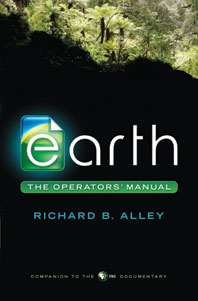 The book—companion to a PBS series—that proves humans are causing global warming and offers a path to the future.

Since the discovery of fire, humans have been energy users and always will be. And this is a good thing-our mastery of energy is what separates us from the rest of the animal kingdom and has allowed us to be the dominant species on the planet. However, this mastery comes with a price: we are changing our environment in a profoundly negative way by heating it up.

Using one engaging story after another, coupled with accessible scientific facts, world authority Richard B. Alley explores the fascinating history of energy use by humans over the centuries, gives a doubt-destroying proof that already-high levels of carbon dioxide are causing damaging global warming, and surveys the alternative energy options that are available to exploit right now. These new energy sources might well be the engines for economic growth in the twenty-first century.

“Starred Review. Alley thoroughly explains the dynamics of global warming and its negative consequences, and parses the economic benefits of renewable energy. He also forthrightly addresses ‘Climategate,’ the politicization of science, and common misperceptions that stoke skepticism about what he convincingly demonstrates is the ‘solid science’ of global warming. Alley concludes with suggestions for a ‘measured transition’ to a combination of wind, solar, sea, and geothermal power. Alley’s lively and positive Earth ‘operating manual’ is the substantial companion book for a new PBS series that will air in April to mark Earth Day.” — Booklist

“This optimistic book ought to convince even the most obstinate climate-change denier.” — Publishers Weekly