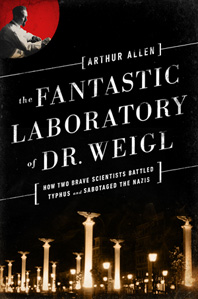 From a surrealistic lab in wartime Poland comes one of the great untold accounts of moral and intellectual heroism of the Second World War.

The gruesome disease typhus, transmitted by body lice, afflicts the desperate: refugees, soldiers and ghettoised peoples. The Nazis, who equated the louse with "parasitic, subhuman" Jews, so feared the disease that they granted special status to the Polish scientist Rudolf Weigl, the only one who could make an effective vaccine. Weigl’s laboratory became a centre of intellectual activity and resistance. Among his assistants was Ludwik Fleck, later sent to Buchenwald, where he deceived the Nazis and undermined their medical trials. Drawing on extensive research and interviews, Arthur Allen tells a harrowing story of two brave scientists, who put their training to the best use, at the highest personal risk.

“This fascinating story is told well by Arthur Allen, an American journalist. The book is a fitting memorial to the heroism of Weigl and Fleck.” — Theodore Dalrymple, The Times