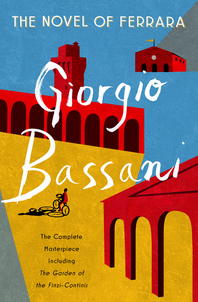 Giorgio Bassani’s six classic books, collected for the first time in English as the epic masterwork they were intended to be.

Among the masters of twentieth-century literature, Giorgio Bassani and his Northern Italian hometown of Ferrara “are as inseparable as James Joyce and Dublin or Italo Svevo and Trieste” (from the Introduction). Now published in English for the first time as the unified masterwork Bassani intended, The Novel of Ferrara brings together Bassani’s six classics, fully revised by the author at the end of his life: Within the Walls, The Gold-Rimmed Spectacles, The Garden of the Finzi-Continis, Behind the Door, The Heron, and The Smell of Hay.

Set in the northern Italian town of Ferrara before, during, and after the Second World War, these interlocking stories present a fully rounded world of unforgettable characters: the respected doctor whose homosexuality is tolerated until he is humiliatingly exposed by an exploitative youth; a survivor of the Nazi death camps whose neighbors’ celebration of his return gradually turns to ostracism; a young man discovering the ugly, treacherous price that people will pay for a sense of belonging; the Jewish aristocrat whose social position has been erased; the indomitable schoolteacher, Celia Trotti, whose Communist idealism disturbs and challenges a postwar generation.

The Novel of Ferrara memorializes not only the Ferrarese people, but the city itself, which assumes a character and a voice deeply inflected by the Jewish community to which the narrator belongs. Suffused with new life by acclaimed translator and poet Jamie McKendrick, this seminal work seals Bassani’s reputation as “a quietly insistent chronicler of our age’s various menaces to liberty” (Jonathan Keates).

"By connecting with Bassani's souls, and sometimes by even becoming one (or all) of them, McKendrick brings to life--anew--the miracle of translation." — John Florio Prize for Italian Translation shortlist citation

"Sitting beside the author watching a fire blaze--destructive, beautiful, and above all compelling--is largely how it feels reading Bassani's work." — Tim Parks, Harper's Magazine

"The book is stippled with shadow and light. Bassani pairs the sorrow of exclusion with the hope of joy and acceptance... The power of Bassani's writing is such that, for a moment, his transitory world seems beautifully everlasting." — Sam Sacks, Wall Street Journal

"The long overdue first appearance in English of Georgio Bassano's Il romanzo di Ferrara in a single volume, as the great Italian Jewish writer always intended, was very welcome. Translated by Jamie McKendrick as The Novel of Ferrara, it consists of four novels and two collections of stories, all suffused with Bassani's melancholia and sly wit." — Peter Parker, Spectator

"The Novel of Ferrara can be compared to Joyce's Dubliner's or Balzac's La Comédie Humaine; but a more fitting parallel is the yizkor books that were  produced after the Holocaust to commemorate so many vanished Jewish towns." — Adam Kirsch, Tablet Magazine

"Bassani's history of the "little segregated universe" from which he was expelled is essential reading for anyone thirsting for an understanding of the complex density of Europe's multicultural inheritance, or wondering whether the world we know might once again be falling for the temptations of fascism." — Fernanda Eberstadt, New York Times Book Review

"Giorgio Bassani's The Novel of Ferrara, in its complete form, splendidly translated by Jamie McKendrick, is a book of immense pathos, eloquence, elegiac splendor, and a requiem for so much of Italian Jewry." — Harold Bloom

"The best fiction writer of postwar Italy... The Novel of Ferrara has a sensuous and subtle economy, a fulness of dramatic life and depth of art that none of the other three [Calvino, Pasolini, Sciascia] comes near... He wrote about exclusion, desire, betrayal, memory." — Peter Robb, Midnight in Sicily

"The fiction of this most dispassionate, most merciless and clear-eyed chronicler of the sequences and consequences of history—in stories almost always about the city's decisions about whom to include or exclude as its own—is, in the end, against all the odds, a declaration of love." — Ali Smith, The Guardian