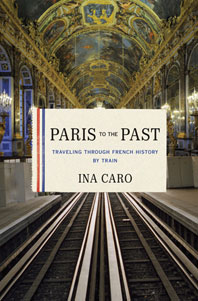 "I'd rather go to France with Ina Caro than with Henry Adams or Henry James."—Peter Prescott, Newsweek

In one of the most inventive travel books in years, Ina Caro invites readers on twenty-five one-day train trips that depart from Paris and transport us back through seven hundred years of French history. Whether taking us to Orléans to evoke the miraculous visions of Joan of Arc, to Versailles to experience the flamboyant achievements of Louis XIV, or to the Place de la Concorde to witness the beheading of Marie Antoinette, Caro animates history with her lush descriptions of architectural splendors and tales of court intrigue. Organizing her destinations chronologically from twelfth-century Saint-Denis to the nineteenth-century Restoration at Chantilly, Caro appeals not only to the casual tourist aboard the Metro or the TGV but also to the armchair reader of Peter Mayle's A Year in Provence. Caro's passion for and knowledge of France—its soaring cathedrals, enthralling history, and sumptuous cuisine—are so impressive that Paris to the Past promises to become one of the classic guidebooks of our time.

“It is hard to imagine a more enchanting or more brilliantly conceived book. With Ina Caro as your guide, you will fall in love with French history. Ancient castles and cathedrals come to life through her marvelous stories; biographical gems capture the lives of memorable kings and queens. But most of all, you will fall in love with Ina Caro herself—with her infectious love of history, food and architecture, her husband and life itself.” — Doris Kearns Goodwin

“Ina Caro's Paris to the Past has convinced me that I must visit France again very soon, and this time I know who my guide will be. Even the most hardened Francophobe won't be able to resist Caro's charms and infectious enthusiasm for the great stories of French history. This is one of the most captivating and original travel books in years.” — Gay Talese

“With charming humor and easy erudition, Ina Caro’s Paris to the Past is an exuberant journey from the City of Light to the outlying monuments of its storied, glorious, peculiar, and even culinary past. Ushered from Romanesque church to Gothic cathedral, from gilded bronze doors to walled cities, from Joan of Arc to Marie de Rohan to Rochefoucauld, we travel with our companionable, piquant narrator into the vagaries and unexpected corners of time and place. This is a gem of a book-- part history, part travelogue, part love affair—impossible to put down, until that is, we pack it for Paris.” — Brenda Wineapple, author of Genet: A Life of Janet Flanner

“This book is animated by love on every page: love of French history, love of ancient pageantry, palaces, and cathedrals, and love of the historian husband who accompanies her on her wanderings. Paris to the Past is guaranteed to enrich the experience of both newcomers to France and veteran travelers alike.” — Ron Chernow, author of Washington: A Life

“Read Ina Caro's wonderful Paris to the Past, fall in love again with the most beautiful city in the world, and start packing your bags.” — Robert Massie, author of Nicholas and Alexandra