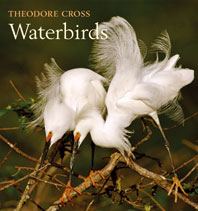 The book John James Audubon would have made if he had used a camera.

Brushing aside rattlesnakes on Green Island, Texas, or enduring the bitter cold of an Alaskan winter, Theodore Cross has pursued waterbirds with passion. On four continents, from the tundra of eastern Siberia to the tropical islands of the South Pacific, he has captured elegant and unusual birds—from auklets and egrets to gannets and sanderlings—in peak action, be they courting, landing on a perch, plunge diving, or engaged in aerobatics.

These breathtaking photographs are accompanied by gracefully written field notes and fascinating accounts of the birds’ habits and habitat. The book is introduced by an extended anecdotal essay giving insights and observations of the extraordinary man who, at age eighty-five, is as eager to track down an eagle in Alaska as he was when he began photographing in midlife.