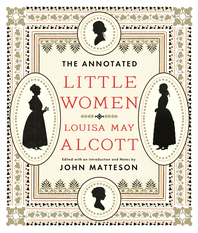 The Pulitzer Prize-winning biographer of Louisa May Alcott illuminates the world of Little Women and its author.

Since its publication in 1868, the beloved children’s classic Little Women, has been handed down from mother to daughter. It has inspired an opera, three films and a musical. In this lavish four-colour edition, renowned Alcott expert John Matteson brings unprecedented vibrancy to the book, to the March family it creates and to the Alcott family who inspired it. With numerous photographs taken for this edition, readers discover the extraordinary links between the real and the fictional family. Matteson’s annotations bring us back in touch with the objects and culture of a distant but still-relevant time. His introductory essays examine Little Women’s pivotal place in children’s literature and tell the story of Alcott herself, a tale every bit as captivating as her fiction.

Also By: Louisa May Alcott