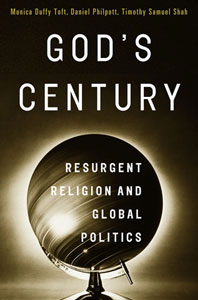 A fresh and illuminating perspective on the surge in religion’s political influence across the globe.

Is religion a force for good or evil in world politics? How much influence does it have? Despite predictions of its decline, religion has resurged in political influence across the globe, helped by the very forces that were supposed to bury it: democracy, globalization, and technology. And despite recent claims that religion is exclusively irrational and violent, its political influence is in fact diverse, sometimes promoting civil war and terrorism but at other times fostering democracy, reconciliation, and peace. Looking across the globe, the authors explain what generates these radically divergent behaviors. In a time when the public discussion of religion is overheated, these dynamic young scholars use deeply original analysis and sharp case studies to show us both how and why religion’s influence on global politics is surging. Finally they offer concrete suggestions on how to both confront the challenges and take advantage of the opportunities posed by globally resurgent religion.