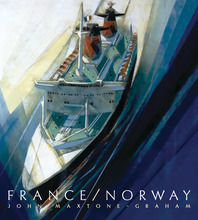 The dean of ocean-liner historians brings to life one of the last transatlantic liners: the legendary France, later renamed Norway.

As a dedicated passenger during both the vessel's lives, John Maxtone-Graham is in a perfect position to give us this rich, profusely illustrated history of France/Norway. The French Line's dazzling ocean liner S.S. France was alone in her class until the arrival of the QE2 in 1967. She was fast, chic, lavishly manned, and offered sumptuous catering. For a dozen years she was a star on the North Atlantic. However, in the summer of 1974, with jet airliners dominating transatlantic travel, France was withdrawn and allowed to molder for five years.

Then a miraculous reprieve: the head of Norwegian Cruise Line decided to buy France; the vessel was revamped for warm weather and rechristened Norway. One of the last North Atlantic liners became the Caribbean's first megaship. The singularity of this incredible hull that sailed in two contrasting modes demands remembrance—she was the pioneering big ship, popularizing a scale of cruising then unknown.