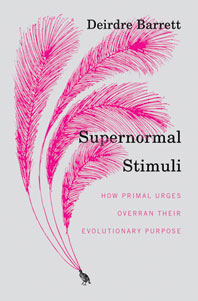 How our once-helpful instincts got hijacked by our garish modern world.

Have you ever wondered why some men choose pornography over actual women? Why so many people watch Friends instead of going out with their own buddies? Why a person would “feed” a plastic Pocket Pet while shirking real duties? Why both sides of every war see the other as the aggressor against whom their “Department of Defense” must respond?

Harvard evolutionary psychologist Deirdre Barrett explains how human instincts—for food, sex, or territorial protection—developed for life on the savannah ten thousand years ago, not for today’s world of densely populated cities, technological innovations, and pollution. Evolution, quite simply, has been unable to keep pace with the rapid changes of modern life. We now have access to a glut of larger-than-life objects—from candy to pornography to atomic bombs—that gratify outmoded but persistent drives with dangerous results.

In the 1930s Dutch Nobel laureate Niko Tinbergen found that birds that lay small, pale-blue eggs speckled with gray preferred to sit on giant, bright-blue, plaster dummies with black polka dots. He coined the term “supernormal stimuli” to describe these imitations that appeal to primitive instincts and, oddly, exert a stronger attraction than real things. Obviously these hard-wired preferences pose a danger to a species’ survival. Barrett’s singular insight is to apply this phenomenon for the first time to the alarming disconnect between human instinct and our created environment. Her book adroitly demonstrates how supernormal stimuli are a driving force in many of today’s most pressing problems, including obesity, our addiction to television and video games, and the past century’s extraordinarily violent wars. Man-made imitations, it turns out, have wreaked havoc on how we nurture our children, what food we put into our bodies, how we make love and war, and even how we understand ourselves.

Barrett does more than pull the fire alarm to show how these unfettered instincts fuel dangerous excesses. There is a hopeful message here as well. Once we recognize how supernormal stimuli operate, we can craft new approaches to modern predicaments. Humans have one stupendous advantage over Tinbergen’s birds: a giant brain. The message of this book is that this gives us the unique ability to exercise self-control, override instincts that lead us astray, and save ourselves from civilization’s gaudy traps.

“The concept of a supernormal stimulus is essential to understanding the influence of evolution on organisms in artificial environments—which in the case of humans is almost every aspect of our surroundings. In this clear and thoughtful book, Deirdre Barrett offers the first comprehensive overview of the many ways in which we stimulate ourselves in ways that the forces of evolution never anticipated.” — Steven Pinker, Harvard College Professor, Harvard University, and author of How the Mind Works and Enlightenment Now

“Supernormal Stimuli is just super. The reader is shown how by understanding our evolutionary past we can see how our lives are guided today. This book is a great example of the ancient wisdom that to ‘know thyself’ is the key to the good life.” — John Ratey, MD, Associate Clinical Professor, Harvard Medical School, and author of Spark: The Revolutionary New Science of Exercise and the Brain

“Deirdre Barrett’s new book is a super stimulus to our normal imagination. She shows us that biology will be our destiny if we do not recognize our inherited tendency to overvalue supernormal color, size, and taste. She travels effortlessly from the pioneers of ethology—the study of animal behavior—to our current exaggerated preoccupations with sex, food, and war. She lucidly helps us to see the ordinary in an extraordinary new light.” — David Spiegel, MD, Willson Professor and Associate Chair of Psychiatry & Behavioral Sciences, Stanford University School of Medicine