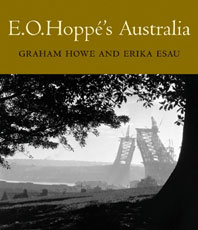 An unprecedented portrait of this vast continent as it appeared in the 1930s.

“Hoppé’s skill as a photographer, his interpretation of Australian identity, the cohesion and national scope of the collection make this one of Australia’s national treasures.” —Linda Groom, curator of pictures, National Library of Australia

Photographer E. O. Hoppé journeyed to Australia in the 1930s with the goal of capturing “the true spirit” of the nation. Enthralled by the country and its people, he traveled for a year tirelessly capturing images of life in bustling cities as well as the remote interior. No other photographer had presented such a comprehensive national portrait at the time; his iconic images captured a land both wild and refined.

Despite being one of the most famous photographers of the 1920s and 1930s, Hoppé’s work fell into obscurity after World War II. It was not until the publication of E. O. Hoppé’s Amerika that his justly deserved reputation as one of the foremost modernists was restored.