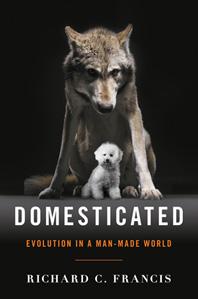 The amazing story of how certain ancient animals chose to live near humans, thus sealing their evolutionary fate.

The wolf evolved into the Pekingese, the wildcat into the tabby cat and the auroch into the milk-producing cow. This happened through the process called "domestication". Domesticated creatures have served us well— without them, civilisation as we know it would not exist.

Richard C. Francis weaves history, archaeology and anthropology, while seamlessly integrating the most cutting-edge ideas in twenty-first-century biology, to create a fascinating narrative. Each domesticated species is a case study in evolution, and two key themes emerge: that domestication often results in the retention of juvenile traits and that evolution remains fundamentally a conservative process. Francis also explores the ways in which these themes apply to human evolution.

“We humans evolve side by side with other animals in the process of domestication, and in this intriguing study, science journalist Richard Francis tracks those changes.” — Nature

“An essential read for anyone interested in the stories of the animals in our homes and on our plates.” — BBC Focus

“This wonderful book tells its tale in spellbinding detail.” — Geographical