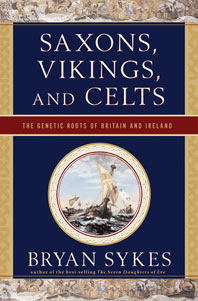 From the best-selling author of The Seven Daughters of Eve, an illuminating guide to the genetic history of the British Isles.

One of the world's leading geneticists, Bryan Sykes has helped thousands find their ancestry in the British Isles. Saxons, Vikings, and Celts, which resulted from a systematic ten-year DNA survey of more than 10,000 volunteers, traces the true genetic makeup of the British Isles and its descendants, taking readers from the Pontnewydd cave in North Wales to the resting place of "The Red Lady" of Paviland and the tomb of King Arthur. Genealogy has become a popular pastime of Americans interested in their heritage, and this is the perfect work for anyone interested in finding their heritage in England, Scotland, or Ireland.