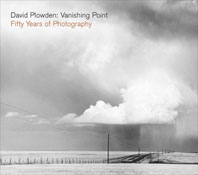 “No one has photographed America as has David Plowden. ... He is one of the great artists of our time.”—David McCullough

This beautiful volume is both a tribute to and a celebration of the photographer who, more than anyone else, has given us a visual record of our mark on the land over the last half-century. David Plowden’s beautiful black-and-white images reveal his great respect for man’s ingenuity and honest work, documenting a disappearing landscape of industry, small towns, wonderful devices, and noble structures. David McCullough writes, “Plowden has produced some of the most powerful photographs we have of man-made America. He is propelled, driven, by a sense of time running out and the feeling that he must not just make a record, but confer a kind of immortality on certain aspects of American civilization before they vanish.” As Walker Evans gave us the first half of the twentieth century, David Plowden has given us the second. David Plowden: Vanishing Point represents the best of this magnificent body of work.