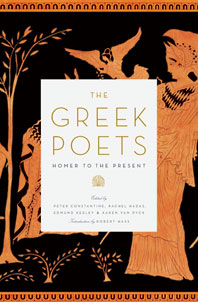 Three thousand years of the greatest Greek poetry, exquisitely translated and assembled in a handsome volume sure to be a modern classic.

This landmark volume captures three millennia of Greek poetry—more than 1,000 poems and 200 poets. From the epics of Homeric Greece to the historical and erotic ironies of Cavafy, from the romances, hymns, and bawdy rhymes of Byzantium to the innovative voices of a resurgent twentieth century, this anthology brings together the diverse strands of the Greek poetic tradition. The favorites are all here—raging Achilles, restless Odysseus, strong-hearted Penelope—but The Greek Poets also presents neglected eras, from the rise of Constantinople to the end of the Ottoman occupation. In offering canonical poets such as Sappho and Pindar, and the modern Nobel laureates Seferis and Elytis, the renowned editors give us their new translations and bring together other masterful translators, including Robert Fagles, James Merrill, and W. S. Merwin, along with a younger generation that includes Anne Carson, Paul Muldoon, and Alicia Stallings. This is an essential companion to the Western literary tradition.