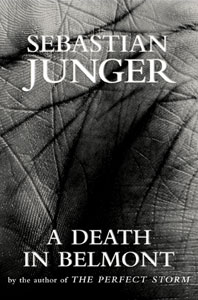 A fatal collision of three lives in the most intriguing and original crime story since In Cold Blood.

In the spring of 1963, the quiet suburb of Belmont, Massachusetts, is rocked by a shocking sex murder that exactly fits the pattern of the Boston Strangler. Sensing a break in the case that has paralyzed the city of Boston, the police track down a black man, Roy Smith, who cleaned the victim's house that day and left a receipt with his name on the kitchen counter. Smith is hastily convicted of the Belmont murder, but the terror of the Strangler continues.

On the day of the murder, Albert DeSalvo—the man who would eventually confess in lurid detail to the Strangler's crimes—is also in Belmont, working as a carpenter at the Jungers' home. In this spare, powerful narrative, Sebastian Junger chronicles three lives that collide—and ultimately are destroyed—in the vortex of one of the first and most controversial serial murder cases in America.