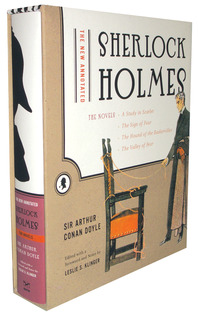 The four classic novels of Sherlock Holmes, heavily illustrated and annotated with extensive scholarly commentary, in an attractive and elegant slipcase.

Whether as a stand-alone volume or as a companion to the short stories, this classic work illuminates the timeless genius of Conan Doyle for an entirely new generation.

“A must-have for any serious mystery fan, this edition will stand as the benchmark for generations to come.” — Publishers Weekly

“A vast work of entertaining ingenuity and erudition.” — Boston Globe

“Even the sleuth of Baker Street would be awed by the ingenious deductions and dazzling speculations of modern Sherlockian scholarship.” — Michael Dirda

“Hailed as the definitive exegesis of Holmes and his times.” — Mark Weingarten, The New York Times

“A feast for any fans of the greatest detective who ever stalked the earth.” — Maureen Corrigan, Fresh Air