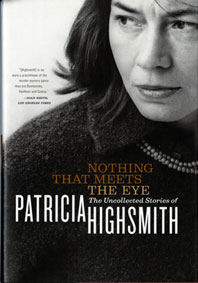 "Highsmith is no more a practitioner of the murder mystery genre...than are Doestoevsky, Faulkner and Camus."—Joan Smith, Los Angeles Times

The Patricia Highsmith renaissance continues with Nothing That Meets the Eye, a brilliant collection of twenty-eight psychologically penetrating stories, a great majority of which are published for the first time in this collection. This volume spans almost fifty years of Highsmith's career and establishes her as a permanent member of our American literary canon, as attested by recent publication of two of these stories in The New Yorker and Harper's. The stories assembled in Nothing That Meets the Eye, written between 1938 and 1982, are vintage Highsmith: a gigolo-like psychopath preys on unfulfilled career women; a lonely spinster's fragile hold on reality is tethered to the bottle; an estranged postal worker invents homicidal fantasies about his coworkers. While some stories anticipate the diabolical narratives of the Ripley novels, others possess a Capra-like sweetness that forces us to see the author in a new light. From this new collection, a remarkable portrait of the American psyche at mid-century emerges, unforgettably distilled by the inimitable eye of Patricia Highsmith.

A New York Times Notable Book and a Washington Post Rave of 2002. "Almost every piece...contains touches that reveal what a subtle writer Highsmith was."—James Campbell, New York Times "A thrilling compendium of work full of surprises."—Ed Siegel, Boston Globe "One of the exhilarating effects of reading Highsmith's stories...is the greatly enlarged sense of her range and energy...in their surehandedness, their amazing breadth and abundance...[these stories] compel attention and they add significantly to her already formidable presence."—James Lasdun, Washington Post