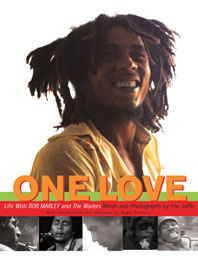 An intimate portrait of two years on the eve of fame by a friend and collaborator of the Wailers.

In 1973 young artist and filmmaker Lee Jaffe met Bob Marley in New York City and within hours cemented a friendship that would see Jaffe becoming a "Wailer" right down (or up) to his dreadlocks. While Marley was well known in Jamaica, he was little known in the rest of the world. Jaffe witnessed Marley's life and increasing fame during those years. He helped organize Marley's first American tour and played reggae with the Wailers throughout Jamaica. He learned Rastafarian ways. And he took wonderful, candid photographs of the many colorful characters who moved through Bob's world. This book, with the photographs and Jaffe's account of those exciting years, is a lens through which we have an intimate view of the young Marley. Jaffe's recollections of life with Marley are little diminished by time. Indeed, they are as colorful as the photographs, and as revealing. 120 four-color photographs.