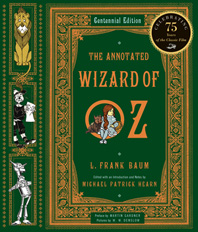 In celebration of the 100th anniversary of its publication, a beautifully illustrated annotation of The Wizard of Oz, complete with an exact reproduction of the original 1900 edition.

The Wonderful Wizard of Oz is the quintessential American fairy tale. Michael Patrick Hearn, the world's leading Oz scholar, now provides a fascinating new annotation that not only reacquaints readers with the Tin Woodman, Scarecrow, and Cowardly Lion, but also illuminates the colorful background of this treasured American classic. This edition explores numerous contemporary references, provides character sources, and explains the actual meaning of the word "Oz." A facsimile of the rare 1900 first edition appears with the original drawings by W.W. Denslow, as well as 25 previously unpublished illustrations. There is a bibliography of L. Frank Baum's published work, every notable "Oz" edition, and the stage and cinematic productions from 1939's The Wizard of Oz, to the 1974 Broadway hit, The Wiz. A beautiful, awe-inspiring work, The Annotated Wizard of Oz is an enduring tribute to the timeless joy of The Wizard of Oz, and a classic to rival Baum's own.

“I have never known or heard of an American man or woman who has started to read The Wonderful Wizard of Oz and put it down without finishing it.” — James Thurber

“If you ever talk to anyone who has written, you'll always find a childhood in which, somewhere along the line, there's a Wizard of Oz.” — William Styron

“Seeing The Wizard of Oz made a writer of me.” — Salman Rushdie