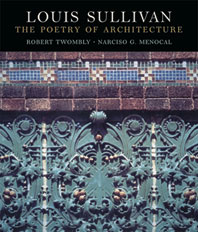 Louis Sullivan believed that art should reveal the creative method of nature. The greatest artist was the poet, whose understanding of nature spurred social change.

This volume is both a tribute to Sullivan’s poetic genius and a catalogue of all his graphic work. The authors discuss the social implications of Sullivan’s theories of architecture, with visual proof of his vision in illustrations of his work on paper and in three dimensions. A translation of 'Etude sur l’inspiration,' Sullivan’s seminal and heretofore unpublished credo in verse, is further testimony to his vision. Included is an illustrated catalogue of all extant Sullivan drawings, some never before published.