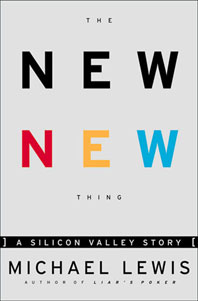 Despite the variety of his achievements, Clark thinks of himself mainly as the creator of Hyperion, which happens to be a sailboat . . . not just an ordinary yacht, but the world's largest single-mast vessel, a machine more complex than a 747. Clark claims he will be able to sail it via computer from his desk in San Francisco, and the new code may contain the seeds of his next billion-dollar coup.

On the wings of Lewis's celebrated storytelling, the reader takes the ride of a lifetime through this strange landscape of geeks and billionaires. We get the inside story of the battle between Netscape and Microsoft; we sit in the room as Clark tries to persuade the investment bankers that Healtheon is the next Microsoft; we get queasy as Clark pits his boat against the rage of the North Atlantic in winter. And in every brilliant anecdote and character sketch, Lewis is drawing us a map of markets and free enterprise in the twenty-first century.

“The most significant business story since the days of Henry Ford... Lewis achieves a novelistic elegance.” — Boston Globe

“It is a splendid, entirely satisfying book, intelligent and fun and revealing and troubling in the correct proportions, resolutely skeptical but not at all cynical...” — Kurt Andersen, The New York Times Book Review

“[R]emarkable....Clark proves to be a character as enthralling as any in American fiction or non-fiction....Lewis tells a great story in this book, with prose that ranges from the beautiful to the witty to the breathtaking.” — Fred Moody, Wall Street Journal