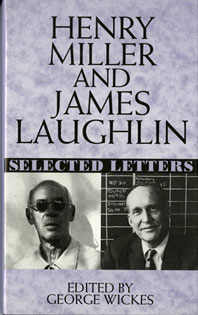 A sparkling, lively record of a remarkable author/publisher relationship.

Ever mercurial in temperament, an idealist who struggled financially to meet his material needs, Henry Miller for decades relied on his publisher James Laughlin's generosity and expert editorial advice. Although Miller's letters decried the conservatism of American book publishing and were often suspicious in tone, Miller nevertheless admired and trusted Laughlin with intimate details about his work and his personal life. The resulting correspondence, spanning from 1935 to 1979, shortly before Miller's death on June 7, 1980, is a remarkable, uncensored record of the ideas and intentions behind many of the author's most provocative literary endeavors.