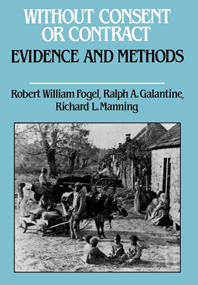 Written to accompany Without Consent or Contract: The Rise and Fall of American Slavery, this book describes a research project into the history of slavery. It provides detailed information in prose, tabular form and graphs.

"Few historians have more skillfully integrated economic with social, intellectual and political history to demonstrate both the importance and the limits of economic developments—the material reality and the perception of it.... Pleasurable as well as instructive reading for anyone interested in the most fateful of our national crimes and the most fearful of our national crises.... [A] splendid book." —Eugene D. Genovese, Los Angeles Times Book Review