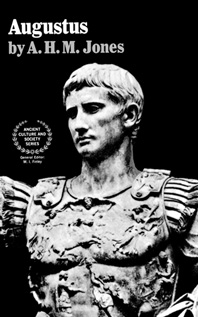 Constitutional changes, administrative revisions, factional rivalry, and war are all themes that Professor Jones develops within the main narrative. He treats separately such topics as finance, religion, social policy, literature and the arts, and the sources of this crucial period in the history of Rome.

Professor Jones discusses the career of Augustus in the context of the turbulent times of the breakdown of the Roman Republic into civil war. He shows how dependent Augustus' rise to power was upon his adoption by Julius Caesar, and traces the ruthless and unscrupulous way in which Augustus exploited his unique position as "Caesar's heir." But he demonstrates that Augustus's continuing success was all his own: the adopted son succeeded in solving the political crisis which, because he had failed to do so, had cost the father his life. For Augustus was a consummate politician, and it was his great achievement to establish a form of government which proved more or less stable for over two centuries.