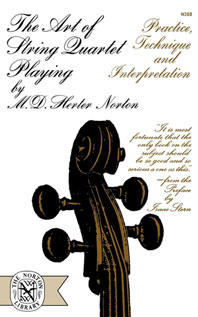 "Full of meat, of precepts, explanations, advice; all of singular soundness and practicability, lucidly put, clearly brought to the musicians consciousness by the examples in the score." --New York Times

For the rapidly growing thousands (both amateur and professional) who find the deepest satisfaction of life in playing chamber music, this is the only practical and authoritative guide.

Beginning with such elementary problems as who should sit where, what kind of music stands to use, etc., it goes on to such puzzlers as just how loud forte is, how fast an allegro, how and when an inner voice takes over the lead, and similar problems in the works of composers from Haydn to the moderns.

Every musical point is illustrated with specific examples, and there are 132 musical quotations in full score.

The idea for writing this book was evolved while Ms. Norton was training with Louis Svecenski of the Kneisel Quartet, and the manuscript was carefully gone over and heartily endorsed by Franz Kneisel, leader of the Quartet which set the highest standards of this art in the United States. The dedication of the book to members of the Quartet, three of whom had been the author's teachers, was inevitable. An earlier version of the manuscript was brought out by Carl Fischer in 1925; the present revised version was prepared in 1961-2.