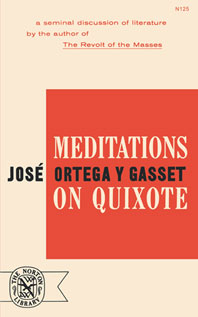 A seminal discussion of literature by the author of The Revolt of the Masses.

First published in 1914, Meditations on Quixote was Ortega's first book. It has immensely grown in value with time, and since the 1930's, when Ortega himself began to refer back to it in his later writings, it has become more and more important among students of his philosophy as a key to fuller understanding of his work. It may be said to represent the core of Ortega's thought, especially in regard to art and literature.

Only as a point of reference is this book concerned with Quixote. As was his custom, Ortega ranges widely and offers profound insights on Mediterranean culture, epic poetry, tragedy and comedy, the nature of the novel, the relation of poetry to reality, and many other subjects.