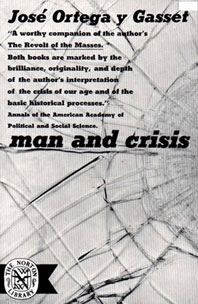 “A worthy companion of the author’s The Revolt of the Masses. Both books are marked by the brilliance, originality, and depth of the author’s interpretation of the crisis of our age and of the basic historical processes.” —Annals of the American Academy of Political and Social Science

A brilliant examination of the twentieth century predicament in the light of the shift in Rome from paganism to Christianity and the transition from the static world of the Middle Ages to the expanding one of the Renaissance.